In this edition of "The WelderDestiny Compass":

When people’s freedoms are removed, invariably some kind of revolution is just around the corner. Having grown up in apartheid South Africa, I have firsthand experience of this. Unfortunately, this situation has been experienced just about everywhere, and is still being experienced in one form or another all over the world.

Today we look at how regulations can take away our freedom, and speculate on how this situation may be addressed in the future.

In response to last week’s The WelderDestiny Compass regarding codes and standards, Nicolas made some interesting points regarding collaboration and getting involved as individuals. Click here to read more…

If you would like to add your ideas to this week’s discussion, then please send me an e-mail with your ideas, (Send your e-mails to: compass@welderdestiny.com) or complete the comment form on the page below.

Now let's get stuck into this week’s topics...

We instinctively accept that laws and regulations are best made by the government. We vote for our representatives, and then feel that they will do the right thing regarding which laws to implement and ultimately to protect our freedoms.

History suggests that this trust is probably misplaced. Below is a table from “Americans for tax reform”. It gives a summary of how the American tax code has been changed over the last 104 years by those representatives that that were elected to ensure the freedom of the people. 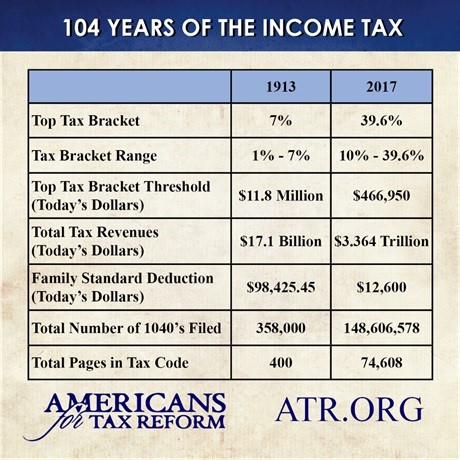 I am not picking on the American system. This picture will be rather similar all over the world, and not only in tax laws and regulations. Road traffic laws, trading laws, family law, food law, medical law, you name it, the picture will be similar. Governments and government organisations have introduced so many regulations that we are all breaking numerous laws every day without even knowing it.

In short, the way that government regulation currently works is not ensuring the freedom of regular law abiding citizens. Rather, it is slowly enslaving us.

Unfortunately, the current regulatory systems in place in most countries cannot curb the natural tendency for those in power to care for their own interests rather than serve those they are supposedly representing.

As we discussed last week in The WelderDestiny Compass, when we looked at codes and standards, commercial organisations will do their best to use regulations to advantage themselves and disadvantage their competitors.

As a rule, the small organisations and “little guys” will be the losers when big companies and industry organisations are involved in establishing regulations.

While industry “self-regulation” sounds like a good idea, here too, history shows us that this is flawed. Many a scandal in the medical and financial arenas have shown us how companies and industry bodies have influenced regulations in such a way that their customers have been disadvantaged. In some instances, even killed and defrauded.

Does technology provide us with a possible solution?

Seeing as I used a negative example from the American system to highlight the problems with government regulations, I think it is only fair to start looking for a solution in the same place.

Close to the end of the 18th century, the USA amended their constitution to include a bill of rights. A great many countries have followed their example.

The normal gist of such a bill of rights is to place restrictions on the powers of the state to encroach upon individual freedoms. Would it make sense to have a “bill of rights” for protecting the “consumer”?

I believe that we are getting to a point where the technology is in place to enable self-regulation by just about any industry. Instead of making it the state’s job to regulate, maybe we should be getting the industries themselves to regulate, but getting the state to monitor the process and enforce a “bill of rights” that protect the little guys, the small businesses, the individuals, the consumers.

As we discussed in last week’s The WelderDestiny Compass, the system could be based on an open platform where anybody can raise their opinions and concerns. The role of the state would be to merely make sure that nobody’s individual rights are being infringed in the process.

The exact legal basis and system is totally outside the scope of our discussion here, but I believe that the concept is something that will surely be tested at some point.

You may think that this sounds like too much effort, and that it would not really touch your life. If you think this way, I think you need to reconsider. We have previously looked at what the typical Welder will look like in the not so distant future, and come to the conclusion that most of us will be "self-employed". Most of us will be the "small business" and "little guy". We are the one's that will need to be protected!

The welding industry is highly-regulated. If such a democratised system is implemented, our whole way of thinking about our role in welding will be challenged. Not only will we be the one’s blindly following regulations with no power to influence them. As the people at the coalface, we have a good understanding for when regulations are unnecessary or ineffective and when they are needed and effective.

I think that the future of regulation in general, and in the welding industry in particular, will shift in the coming decades. Probably a good idea to start preparing ourselves to be contributors when that time comes.

Do You Have Thoughts About This Week's E-Zine?

Now is your opportunity to contribute to the topics in this week's The WelderDestiny Compass. If you have thoughts or examples that you would like to share with other readers of the e-zine, then please contribute by entering the title of your contribution in the box below. Feel free to make a brief or more expansive contribution to our discussion...

Your Ideas on the Future of Regulation

What are your thoughts on the future of Regulation? Do you think that a democratisation of regulation is possible or even desirable? Please share your stories, opinions, insights and even fears or wishes regarding today's topics.