Welds are often given a Post Weld Heat Treatment. (PWHT) There are various reasons for this, and various methods of applying this post weld heat treatment. There are also certain risks associated with PWHT. In this web page we will explore the use of PWHT.

Firstly we will look at different types of heat treatment, and then we will correlate them with the welding operation. 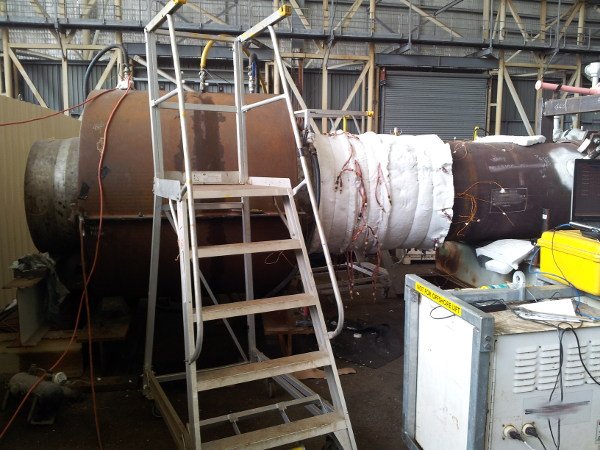 Post Weld Heat Treatment (PWHT) Set-Up on Pipe: The white is the ceramic blanket insulation to keep the heat in. The thin wires are the thermocouple attachments wires. The thicker plugs are for supplying current to the electrical resistance heaters.

There are some other more specialized heat treatments that are sometimes employed under very special circumstances, but for our purposes, those listed above would be the main heat treatments to take note of. 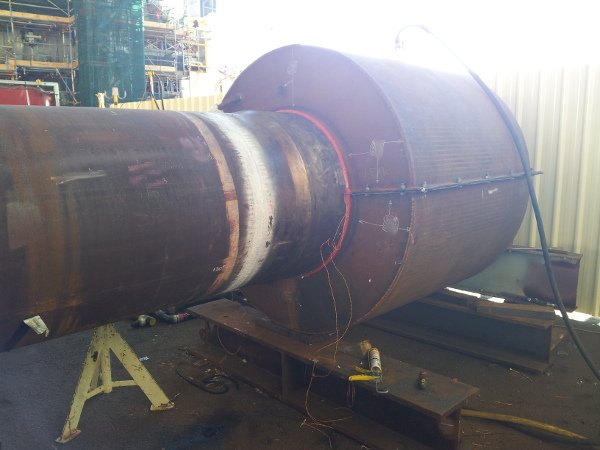 The Effect of Welding on Materials

The part of the base metal that has had its structure changed by the welding heat is known as the Heat Affected Zone (HAZ) of the weld. The material where the temperature was not high enough to make any significant difference to the material is simply called the base material. The section that was melted due to the welding operation is termed the weld metal.

The weld metal structure is going to be a function of the base metal compositions, the filler metal composition and the effects caused by the thermal cycle. As a general rule we can choose the filler metal to give the desired results within the weld metal. We can however not do anything, in terms of the composition, to the heat affected zone. (HAZ) The only effect we have in controlling the structure of the HAZ is to control the thermal cycle.

It should also be obvious that the thermal cycle within the HAZ will have significant effects on the material’s heat treatment before the welding operation. As an example, some part of the HAZ of a carbon steel parent metal will be raised to a temperature above which phase transformations occur in the steel. (This is called the critical temperature, and for ordinary carbon steels this is around 720°C.)

This means that by changing the amount of energy used when welding, (also called the heat input) along with pre-heats and post-heats, different structures can be achieved in both the weld metal and the HAZ of the weld.

Some materials, such as low alloy steels, almost always result in a quench hardened structure within the HAZ when welded. They then need a further Post Weld Heat Treatment (PWHT) to achieve the desired result. In the case of our example of a low alloy steel, they almost always need a tempering treatment to achieve a suitable strong and tough microstructure.

Some materials achieve a significant amount of their strength from cold working. Cold working just refers to deforming the metal plastically at a temperature below which the deformed grains of the metal will recrystallize. This treatment results in an increase in strength of the cold worked material.

When welding a cold worked (also called work hardened) material, a section of the HAZ will experience temperatures high enough to cause recrystallization and phase changes. This will eliminate the cold work, and potentially reduce the strength of the material in the HAZ significantly. Please note that no post weld heat treatment can reverse this effect.

This softening is often experienced when welding work hardened aluminum alloys. The HAZ will always be significantly weaker than the cold worked parent metal. The only way to effectively deal with this effect is to design the component in such a way that the weld is placed in a region of lower stress, or the base metal is made thicker than required around the weld area, to compensate for the loss of strength.

The other way that aluminum alloys are typically strengthened, is through precipitation hardening. Again, the welding thermal cycle will introduce an area into the HAZ that is unaged, (Temperature was high enough to return precipitates into solution, followed by a quench due to the high cooling rates typically associated with welding.) and an area that is over aged. (Temperature was higher than required for optimum aging, but not high enough for returning precipitates into solution.) Thus welding of precipitation hardened (also called aged) materials will result in reduced strength of the HAZ. For small components, it may be possible to subject the entire component to a precipitation hardening cycle, but under most circumstances, there is usually nothing that can be done to remedy this reduced strength in the HAZ of a precipitation hardened material. 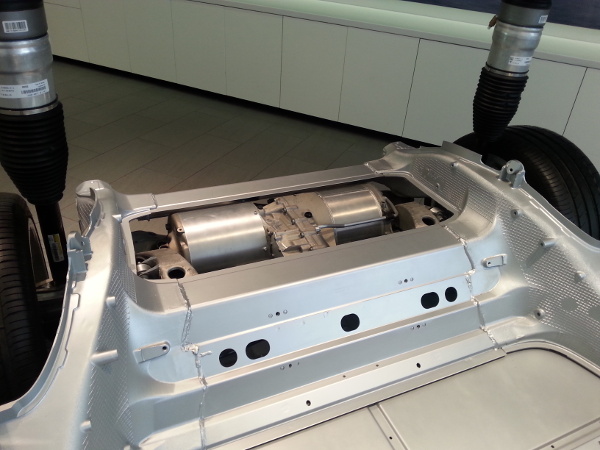 Welds in high strength Aluminium alloys generally result in reduced strength in the weld heat affected zones. (HAZ) In this Aluminium car chassis, this is compensated for in design, by placing the welds (not very pretty welds I may add) in lower stressed areas.

Post Weld Heat Treatment (PWHT) is not without risk. Below is a list of potential problems that can be experienced when performing post weld heat treatment.

There are 3 typical methods to apply the heat for post weld heat treatment. These methods are as follows:

Depending on the method for applying the heat during post weld heat treatment, there are a number of different heat sources. The typical heat sources are:

As a general rule, the fabrication codes dictate when post weld heat treatment is required, and the particular post weld heat treatment cycle. They also generally state the requirements in terms of the methods that can be used, and the maximum heating and cooling rates and the maximum thermal gradients that are allowable. Examples of such codes would be ASME VIII, BS 5500 or AS 4458 for pressure vessels and ASME B31.3 or AS 4458 for piping.

Post Weld Heat Treatment (PWHT) is a specialist area in itself, with many technicians specializing in operating post weld heat treatment equipment and furnaces. If you are interested in getting into this kind of work, then get hold of a company in your area that does this type of work and see if they can offer you a job. Most of the time, these companies will also provide you with the necessary training to operate their specific equipment.

Another technical issue revolves around comparing different PWHT cycles. As this is a bit of a technically detailed subject, I have addressed it in a web page of its own. Click here to see how different heat treatment cycles can be compared.