Welding codes establish the basis for performing Welder qualification tests, or coding tests. There are a large number of different codes. The reasons for the large number of codes are:

It would not add a whole lot of value to try and list all possible welding codes here. Rather we will look at the most typical internationally used codes. In addition, it is not the intention to give detailed descriptions or analyses of each code. Rather we will just make general comments of their applicability so that you can understand which codes you may want to get hold of, based on the niche welding area you may be interested in. Please do not see the welding codes listed here as an exhaustive list. There are hundreds of different codes that are more niche than makes sense to list here. 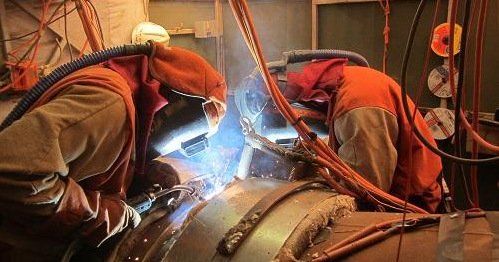 It is important to understand that some codes are referencing codes, and some, referenced codes. What does this mean?

It is also instructive to note that some design codes or standards will give guidelines for what the welding code needs to cover, without actually nominating a specific welding code. It is then up to the end user, and possibly the validation body associated with the particular structure, to specify the welding code to follow. Under this scenario there will usually be additional requirements that will need to be met. For example, ISO 19902 (Off-shore structures) takes this approach.

Most large corporations have their own in-house standards. Mostly these standards clarify which industry codes must be followed, but they may also specify additional requirements over and above those specified in the welding code.

We will not go into these client standards here, as it would be totally impractical given the large number of client organizations out there. It is however important for you as a Welder to understand that sometimes you will be required to do some rather unusual things to meet some of these client standards, or the coupons will be subjected to more rigorous testing than required by the welding code.

As mentioned earlier, this is not an exhaustive list, but it is a good starting point. Also keep in mind that even though there are many different welding codes, many of their requirements overlap, so it is possible to perform a single Welder qualification coupon that could qualify you to weld to a number of different codes. The inspection and testing must just meet the requirements of the different codes.

When looking at the European based codes, we are considering the welding codes that have grown out of traditionally European national codes. A great deal of these codes have morphed into ISO codes and standards. Strictly speaking the ISO codes are "international" rather than just European, and are being used more widely even within the USA, however we will list them here under the European heading, because that is largely where their historical base lies.

There are some industry codes that are widely used internationally, that are not necessarily based on country or regional standards. These could be based on a standard issued by a validation body that has just become the industry norm over time. A prominent example of such a code is:

Seeing as welding is a skill, it is possible for a Welder to lose the particular skills tested in a Welder qualification, if the Welder does not perform similar welding for an extended period of time. Welders therefore need to have their Welder Performance Qualifications (WPQ) revalidated on a regular basis to indicate that they still have the necessary skills to perform the required welding.

As mentioned, there are subtle differences between codes in this regard, but the approach mentioned above is the most widely used revalidation process.